By the age of 26 I had my own business, a new home, a family and lots of toys. However, one day at work, at the age of 24, I lost all feeling in my legs and was rushed to the hospital via ambulance; my life would change forever. I was told I had severe facet disease (probably from a surfing accident in my teens) and sympathetic neuropathy. I would never return to the life I once had. Over the next two years I lost my home, business, cars and any sense of security for my family, just like that – gone. I underwent three major surgeries; the last one fused my whole lumbar spine. During my last surgery, my ordination teacher visited me in the hospital, I remember very little but, moaning out load and shadows. The nurse said “Maybe this is not a good time to see him”. What I do remember clearly is six words that were said “This is not who you are”. The words meant little to me at the time, the waves of pain took every bit of concentration I had. After I got home and settled, I sat on the fire escape of my now one bedroom apartment which housed my family of four. I was looking over the Lehigh River in a lightning storm, and pondering that statement that was offer weeks before “This is not who you are” when a bolt of lightning struck across the highway between the river and I and everything changed in that instant. I know this sounds like something from pop-zen but, this is how my awakening began. I share this story not because I want others to know about my experience, but, to demonstrate my history going into formal Japanese Zen Practice.

I had never really done any formal Zen practice before that initial kensho, in 1986 I started practicing SGI after moving to Pennsylvania. In 1990 I met the man who would become my ordination teacher Thich Nguyen, via his son Thien who attended college with me. I started sitting with them occasionally in their townhouse; however, it was very relaxed, we all had outside demanding jobs and commitments. After that lightening flash though, things became clear, I knew what I needed to do next. I needed to peruse personal depth and clarify my experience. To do this, I needed to find a serious environment in which I could train FT or as much as my health would allow me. In return, I ended up at a couple Soto centers initially; however, it was just not what I was looking for. I was seeking a disciplined practice, which seemed to compliment my unfolding practice and nature; great idea huh? A spine full of screws and rods, still walking with canes and I have now navigated to a Rinzai Monastery, known for its fierce physical and mental training. I am chuckling as I write this!

Zazen was always difficult for me and I knew early on that people didn’t understand me, I mean, how could they? They had no frame of reference, and in no way did I wish my experiences on them. So I accepted how I would be viewed, and at first it bothered me greatly. I was told the first day I started practicing at the monastery that it was normal to have pain and it would go away after a few months; I thought “wonderful”! It was a false promise, still to this day, round after round ends in the same way – severe physical pain; however, I sit unmoving. To me the pain is worth it. After a few years of watching the guys across from me falling asleep while I tried to levitate over my zafu due to the overwhelming pain, I knew something was going on here. Yes, yes, pain is a part of sesshin and zen practice in general; however, this observation is based on a healthy student. The key here is “pain is part of practice” not “practice is pain”. We are not all healthy or have perfect spines; does this mean our karma is such that we cannot practice Zen? This is a question that crossed my mind many times and appeared supported by the attitudes of those around me. I remember during sesshin, when it became too much, I would shamefully crawl upon a chair. In return, I would be moved to the lowest place in the Zendo…way down there, you know the spot. Even people who used more than one zafu were designated as members of the “tower of shame” club by fellow monastics. So sitting in a chair was the worst, and I had no example to see what someone who had disabilities sat like, there was none. Yes, there was the guy with an achy knee who would grab a chair or the person with a slipped disc but, no one who had severe constant physical issues. I was viewed in the same way as the other students who could not sit in traditional full or half lotus, failures and not serious students. I understand that many new students or even elder students “give up” and grab the chair without pushing. “Giving up” creates disappointment for both the student and teacher but, it is up to the student in the end to gauge what is healthy sesshin pain, not someone else. I currently suggest to the members of the Zendo, if the pain becomes so consuming that all you can think of is the horrible pain all day long, then it is time to grab a chair or bench. I have even started putting new students in chairs for their first two sits so they don’t confuse the normal “stretch” pain with how all Zazen is. Culturally, we do not sit cross legged and I do not think Asians, who grow up sitting on the floor, have as much initial pain when sitting in Zazen. 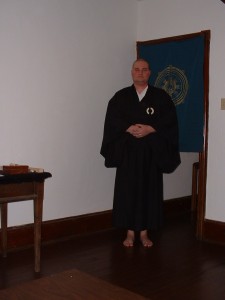 I can remember the first Rinzai Monastery I trained at, the teacher told my visiting father that my problems were a result of my weight. Remember I had been in bed for almost a year before my surgery, so of course I gained some weight.  He said if I could just “lose a few pounds” I would be okay. At this time I was five months out from fusion surgery and still using canes. I did my first sesshin seven months out from surgery and was mowing lawns with staples yet in my spine. This is the attitude I have encountered time and time again. Maybe it was attachment, maybe it was looking for a new persona; however, I like to think it was the faith and insight generated by that lightning flash. Looking back on this, it is not anything I would recommend to anybody, to this degree that is. I am just trying to flesh out the main point of this post.

I have read a couple of articles about teachers breaking their legs and not being able to sit full lotus anymore, and about how scared and embarrassed they were. Imagine what the guy or gal is feeling who is required to sit in a chair, on a bench or even lying down. There was one situation that I would like to point out in which a past osho fought with the abbot to allow a woman with severe back injuries to attend sesshin laying down. Think about the strength of that woman! She ended up leaving though after the abbot demanded she sit up during his teisho. In my mind this women was a true student of no rank. There was also a man with mental illness who attended a sesshin I ran, and he had a panic attack which required him to go to the ER to visit his doctor. He returned one day later and sat like a rock the rest of the sesshin. He would later do several sesshins and ultimately take Jukai. His doctor actually told him to return to the sesshin and complete it – wonderful! The courage he must have had to return in presence of everyone – it humbles me still to this day. We also have a blind women who learned to so sesshin by mapping out the temple beforehand. She would later become a core sangha member (Yes you Lee). She makes me think of Gempo Yamamoto whose life as a disabled monk is an inspiration to me. My point in all of this is as follows, teachers and students should be very cautious when pushing or judging student’s practice based on their physical limits, especially those with disabilities. Moreover, if someone says they are sick, and have the diligence to sit out in the Zendo with a blanket around them versus sleeping in their room, to me that should be rewarded, not punished. I do believe in pushing students; however, they are the ones who ultimately know when to say enough – not you. 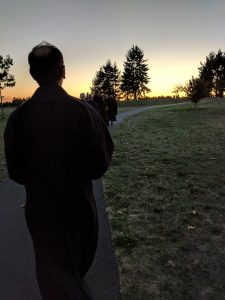